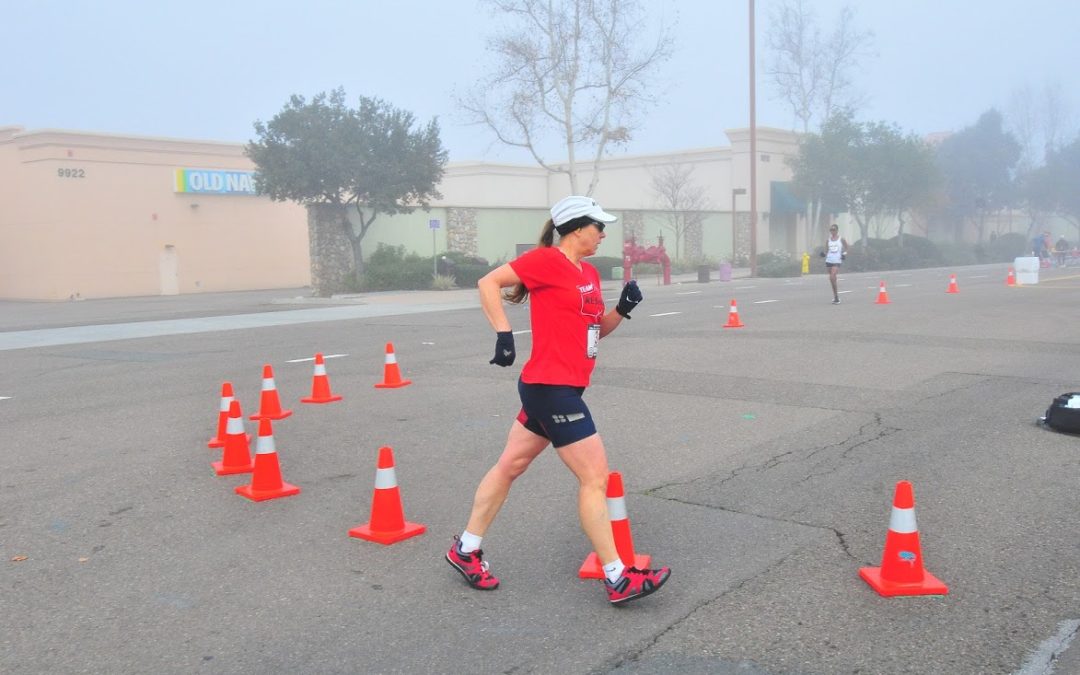 My goal for 2020 was to qualify for the Women’s 50k Olympic Race Walk Trials in Santee, California.  The qualifying time was 5 hours and 45 minutes (11:00 mile pace) but that plan took some very unexpected twists and turns.  If I had a theme song for the last 13 months, it would be “Reason” by the band Unspoken.

This year I learned how emotional stress affects the body physically, mentally and emotionally.  Each key race was preceded by a death in the family.  The first was my father-in-law who had a heart attack a few weeks before the 2019 National 50k Racewalk Championships.  We were very close. He followed up on my training and shoe business regularly, nicknaming me “blue foot” for the race shoes that I was preparing to launch.  We spent 30 Christmases together.  The two of us would go “speed shopping” so we could hurry home to play scrabble or cribbage.  George and I shared a fierce competitive spirit.  He played many practical jokes on me and I’d always reciprocate.  He had a very generous side, too.  He bought me the prescription Nike racing sunglasses I wear in competition, but he mostly supported the vision I have for growing my sport.

Two weeks before the same race, my husband, Craig, experienced loss of vision.  The doctor thought it might be a stroke.  I was on my way to a shoe show in San Diego and had hoped to remain down there to relax before the race but ended up flying home to help him get tests and then fly back for the race.  Thankfully things turned out in our favor, but I was exhausted before the start and the unusually hot weather didn’t help.  I pulled out at 30k because my heart rate was super high and I couldn’t get it to drop.

After that, I had several months of my best training and racing of my life.  The next opportunity to qualify for the Olympic Trials would be in New York on October 20th.  I was confident that I’d get it done.  Then, in May, my dad got sick.  At first, I thought it was under control, but Dad downplayed his condition.  The week before a 24-hour relay in August, my brother told me to come right away.  The doctor was putting him in hospice.  I was so grateful that I could spend a few days with him before he passed away.  Dad was the one who introduced me to track and field.  We watched the 1972 Olympics together on a little black and white TV.  He drove me to my tumbling classes as a kid and nicknamed me “Carmeneci” because Nadia Comaneci was my favorite gymnast.  Each year Dad came to my Santee 50k National races and cheered me on.   After leaving the hospital to return home, I got a text that dad had gone into cardiac arrest. I was numb as I finished packing for my 24-hour relay race the next morning.  I knew he was gone, and having 20 miles of walking ahead of me seemed like the perfect way to process the pain.

The next few weeks are blurry.  I’m pretty sure I took time off, but my last-chance qualifier for the 50k was looming and I needed to pull myself together.  My sister, Rhonda, was planning to join me on the trip. She planned to do my aid during the race, and I was looking forward to spending time with her.  However, two weeks before the race, we learned that another sister had died.  Ugh!  This one was the hardest.  I was tired, and this news was totally unexpected.  My heart hurt and I couldn’t seem to fix it.  My coach suggested skipping the race, but I had already purchased tickets and thought it might be somehow healing.  It wasn’t.  My focus kept drifting.  Grief isn’t something you can stick on your “to-do” pile for a more convenient time.  It shows up randomly and I wasn’t able to walk and cry at the same time.  I struggled to keep it together and ended up pulling out at 30k…again!  But there was one other piece of bad news that actually worked in my favor.  The Women’s Olympic Trials was cancelled…yeah, I know, right?!  It’s a long story, but since the race I was aiming for was now a 50km National race, I could enter without a qualifying time.  Alrightie, then!  Let’s go.

When I returned home, I learned that another family member had cancer.  My heart hurt!  Now I was having shortness of breath and a high resting heart rate.  It took eight weeks before things returned to normal, which left four weeks to race day.  I hadn’t done any long workouts and needed to make sure I was fit enough to get through it.  Two weeks before the race, I officially entered.

The following week included one more death: my husband’s mom finished her battle with Alzheimer’s.  She was a wonderful mother-in-law and we were all relieved that she was having breakfast with Craig’s Dad and no longer living with that terrible disease.  I’m grateful for all her prayers over the year as I navigated the course God has put me on.  While I was very sad, Craig encouraged me to go walk the 50k – Mom would have wanted me to.

So, I dragged you through all of that to say that I managed to finish, which was my goal. I got to shake off 2019 and feel the sun on my face. I even managed to hold that 11 minute pace for over half of the race!!! I was surrounded by my wonderful family that lined the course to cheer and support me. On top of that, I ended up taking 8th place overall and got a wonderful plaque. My story isn’t that I had a great race, but that it was great TO race.  I wanted to finish and I did. I’m not sure what’s next, but I’ll let you know when I do.