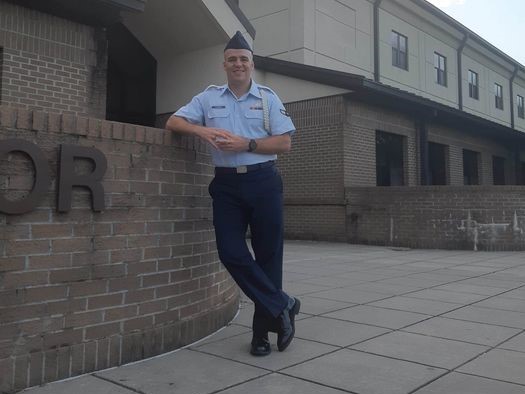 Since today is Veteran’s Day, we thought it might be appropriate to spotlight Keeler Air Force Base graduate and Reshod Walking Shoes Ambassador, Michael Mannozzi.  The husband and father of two young boys, Mike is also one of the fastest racewalkers in the United States of America.  He has competed in National and Olympic Trials competitions, earning spots on several U.S. teams in the process.  Juggling, work, family, training, and racing is no easy feat.  We caught up with Mike shortly after the Men’s US 50k Olympic Trials, which took place in Santee, California in late January 2020.  The interview took place just before the COVID shut down, when the Tokyo Olympic Games were still scheduled to take place.

Reshod:  Congratulations on your sixth place finish at the U.S. Men’s 50k Racewalk Olympic Team Trials.  How did you feel going into your race?

Mike:  Going into the race, I was sleep deprived from my course work, extra study, physical work assignments and other Air Force responsibilities that required a 3:45 am wake-up call the day that I was to fly out of Biloxi, Mississippi.  By the time I arrived in San Diego and checked into my hotel, it was 1:00 am.  Another source of apprehension was a strain in my rotator cuff. I was praying and remaining hopeful that it would not wreak havoc on my performance.  However, I was also ecstatic to be given leave by my chain of command just the day prior to my flight.  While I qualified for the Olympic trials, I still need approval to leave the Air Force Base to physically show up to race. I think my elation outmatched any concerns I had in terms of what place I would finish or what my time would be.  I knew that I had trained the best I could for the one month leading up to the major event which is all I had.  It was just enough to give me confidence to complete the longest foot race in the Olympics being a 31-mile race.”

Reshod: How long have you been race walking and how many 50k Olympic Trials races have you done in your career?

Reshod:  You also race the 20k distance.  Have you qualified for the Olympic Trials in that distance, as well?  Which distance do you prefer?

Mike:  I have not met the qualifying time for the 20K and it is up in the air at this point as my tech school schedule is very demanding and does not allow extra time for training nor regular time to leave for competitions. I would love to qualify for the Olympic trials in the 20K as well but if I cannot, I am delighted to at least I’ve had the opportunity to race in the 50k Olympic trials.

Reshod:  You raced in the red Pushover® Walking Shoes before switching to the blue Coach Carmen® racewalk shoes a little over a year ago. What are the differences that you feel under foot?

Mike:  “In my experience the red Pushover® Walking Shoes better serve as my long and recovery day shoes.  I feel that they are more supportive and take the beating, even though the blue [Coach Carmen®] shoes are long lasting as well. I focus the blue [Coach Carmen®] shoes for speed [training] days as well as racing because they seem just a bit lighter and I seem to feel just a bit quicker turnover in them.”

Reshod:  How did the shoes perform in your race and what makes them different from regular running flats?

Mike: “The blue [Coach Carmen®] racing shoes felt very sturdy under my feet. I had excellent traction for the concrete and asphalt surfaces that we raced on at the Olympic trials and now I know that they’re spectacular compared to other racing flats.  Two years ago, I came back from an injury and during that time I began using the red [Pushover® Walking] shoes and I’ve not had a problem since.”

Reshod:  Did you get any blisters?

Mike: “I had no blisters, no slipping, the shoelaces never came untied.  In short, they were immaculate.  Of the many challenges I face during the 50k race, none of them resulted from the shoes that I wore.  This is key as footwear is the most vital piece of a race walker’s arsenal.  I have also experienced that my Reshod Walking Shoes outlast other racing flats that I used to train in and racing prior of any brand.”

Reshod:  The 50k is a long race.  What motivates you through those tough spots?  How do you talk yourself through it?

Mike:  ‘Perhaps the most constructive thing I do during a 50k is I continually refocus on my technique cues and this is aided when I have verbal cues to remind me of low arm drive or relaxed breathing, especially in the latter stages of the race.  I also dedicate laps to someone or something I’m grateful for and when competing at the Olympic trials. There is no shortage of gratitude to be given when one must overcome so much to get there, especially considering it is the doorstep to the Olympic games and only happens once every four years.  To compete at this stage is not promised to anyone.  Events such as these are going to be treasured stories and adventures to share with my future generations.’’

Reshod:  If you were talking to yourself ten years ago, what advice would you give “Young Mike” to help you stick with the training long-term?

Mike:   “If I had the privilege to speak with Mike 10 years ago I would have sat Mike down and explained that he needs to first establish tangible ways to effectively cope with ADHD as the internet allows much more to be shared and understood.   The need to quickly learn life lessons (goal setting and steps written out to achieve them, time management, financial planning, marrying Jemma 2 years sooner, etc.) Along with other tips that maybe we’re not taught or were serious struggles for him to learn early on.  I would emphasize the importance of how these will make or break his ability to ever make an Olympic team or at least reach his full potential in race walking and in life.  I would tell him to make sure that he can fundraise the money to travel abroad and train abroad while working full time.  If 30 sponsorship requests get turned down or the amount recovered is not sustainable then keep brainstorming 30 more ways as opposed to getting frustrated and walking away from it which results in no progress.

I would hit home the benefit of joining the Airforce immediately because I think that it would prevent many struggles he will have in the next decade and set his family’s future up for long term success and satisfaction.  Along with this is a realistic shot at having  two years on the world class athlete program which would allow for him to train with other top level athletes and allow him his best opportunity to walk the 50k Olympic standard.  I feel privileged to give “young” Mike this valuable advice and help him improve his learning curve and prepare him for the many struggles  he would have to face on the way thus reach his destination sooner and more efficiently before it passes him up.”

Reshod:  If hindsight is 20/20, then this crazy year of 2020 is certainly a great time to reflect on where you’ve been, what you would have done differently, but maybe what you did right, too!  And what’s important.  It seems as though you have made some great choices and prioritized well.  We thank you for your service, wish you a Happy Veteran’s Day and all the best in your future racewalking endeavors.